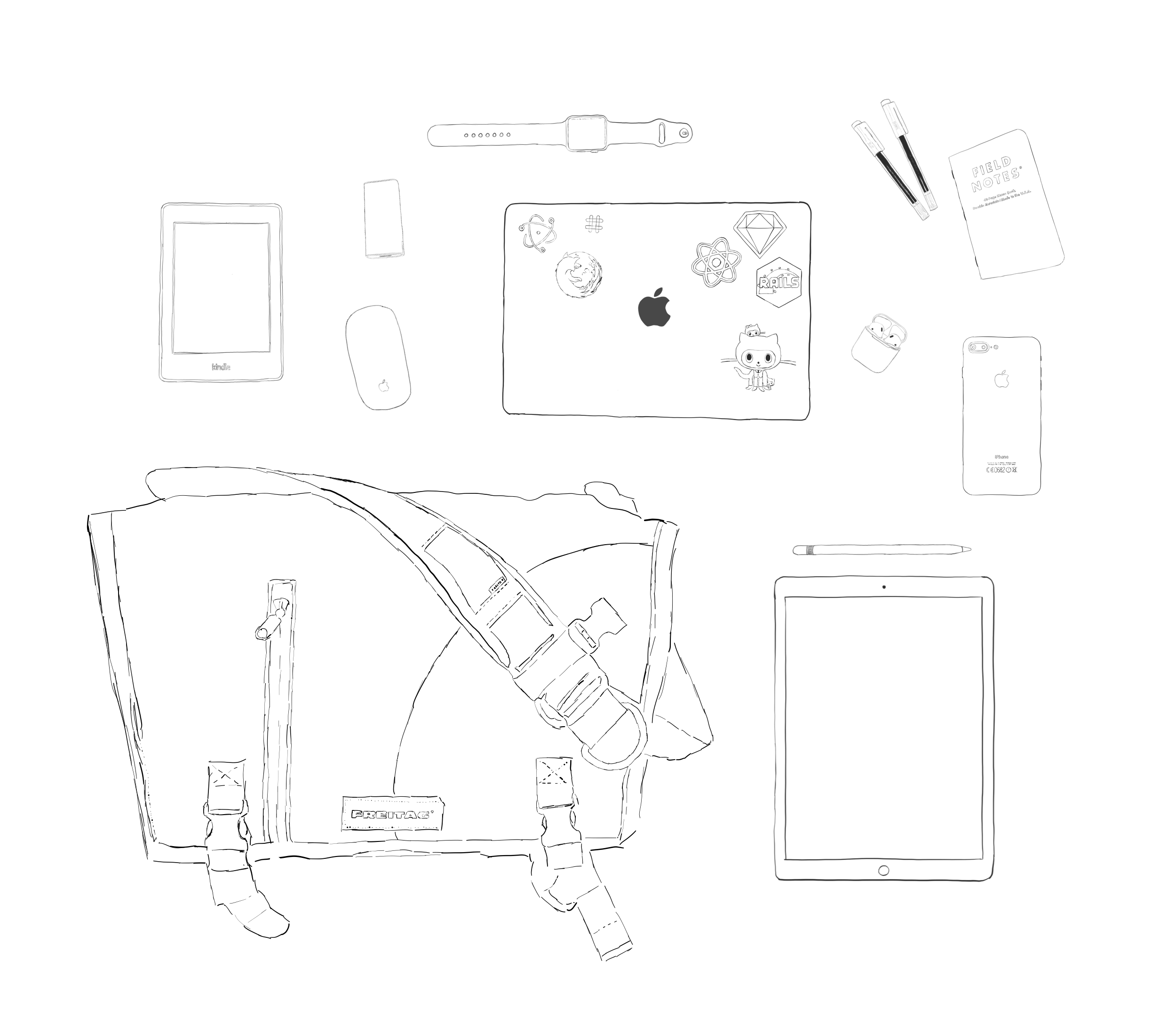 A list of tools and resources that I use to get stuff done. (Last updated: November 2017)

The best possible camera was the reason for the choice. As I am doing a lot of reading on the phone, the big screen is a plus as well.

It's my drawing tablet and a second display for my MacBook if I set up an office on the road (see Duet app below). The later is much more productive than I thought. It doubles screen space and enables me to keep workflows that are based on two displays.

The best product that Apple launched since the original iPad. Completely underrated and as podcast addict currently my most loved gadget.

Nothing is more stressful than searching for a power outlet when things need to get done. Solid emergency charging for iPhone and MacBook.

Looking forward to the day when you need only some AirPods and a watch to manage your digital life. So far only a fitness tracker device and notification tool.

My main bag since 2008: The F17 JOE by Freitag. A messenger bag made from recycled materials. Big fan of the company, their story and their products.

Unbreakable and the best option for reading under sunny conditions. The killer feature of the device though is that it is distraction free compared to the iPad or iPhone. The software side of things is still underwhelming.

A notebook is a notebook. This one though is a constant reminder that it is possible to make a product special by telling a great story.

For sketching wireframes and scribbling. The ink in the erasable pen has a color temperature setting. The frictional heat generated by the eraser at the end of the pen erases the ink immediately.

After the redesign to Things 3, my personal to-do list app to keep a peace of mind. A joy to use if you are into the GTD method. The pricing is... interesting.

The virtual office space of a remote worker. With all the pros and cons of an office space. It's as useful and as distracting as the people that use it.

For projects that need a "Kanban boardish" organization, the first choice.

The oldie is still the first choice for video calls. Mainly because it's still the most spread video calling platform and for 1:1 calls reliable.

For group video calls it's easier to organise and manage than Skype.

The first dedicated and minimal writing tool that I really loved. Many copycats followed. I stay with the Swiss original.

I am a bit tired of the Google Docs design. Paper is a fresh alternative for managing and collaborating on documents with a team.

Checks my second drafts for all the crimes I commit to the English language. It has a Mac app as well as a Chrome browser plugin.

The Hemingway Editor cuts the dead weight from your writing. It highlights wordy sentences in yellow and more egregious ones in red.

A service that involves real humans if you need some editing help. A fast and nice way to double check my texts before embarrassing myself.

The email application of my choice for Mac as well as iOS devices. It has a smart inbox feature and it mimics many features from the good old "Mailbox app" like snoozing. Under the hood I use Gmail, which is because of the spam filtering the most useful solution.

After Sunrise went dark forever, I am using the classic, based on Google Calendar accounts.

There is always a need for a place in the cloud to share your files with others. Dropbox is still a simple reliable choice.

Not my favorite set of office apps, but for the daily life in a team the easiest solution.

Still the best app for creating slide decks and my tool for public speaking or pitching.

I have one local backup via Apple time machine and one in the cloud via Backblaze. Unlimited cloud backup for your Mac for a reasonable price.

A tool that helps you to connect services and web apps you already use. Let's say, you want to automatically update your spreadsheet with your MailChimp data. Done.

My place for doing some calculations and thinking with numbers. Great design.

A tool to manage your copy and paste history. It stores not only text, but also any kind of images or screenshots.

VPN service. Nice and simple. If you need a proxy to use your favorite video streaming service, have a look at ExpressVPN.

Insert snippets of text from a repository of often used text snippets and other content, as you type. A real timesaver. Especially if you do anything close to customer support or outreach campaigns.

Hide your icons and files from your desktop with one click.

The last redesign finally got it on a level that made it a simpler and free alternative to Evernote.

My homebase for everything related to UX and UI design. Still very impressed that they were able to compete with Adobe products. An open API allows third parties to design useful plugins, which is a huge plus. See the "Sketch Plugins" section below.

I'm playing with it for vector animation stuff. With the bodymovin plugin the SVG export is smooth. There is now also an iOS/Android/React Native library that renders After Effects animations in real time. It allows native apps to use animations as easily as they use static assets.

When there is some more complex vector work to do, that exceeds the feature set and performance of Sketch.

My favorite tool for handing over designs to front end devs. Even though InVision offers now similar features, I still like to use Zeplin.

The new "GitHub for Designers". A new tool developed by a dream team of designers. I was part of the beta, but haven't used it for a production project, yet. It looks promising, though it feels as if it would be most useful for design teams with 3+ people.

For building high-quality prototypes for user testing or client presentations.

On the iPad Pro currently my choice for doing some drawings. The copy-paste sharing with the Mac works flawlessly. As well as sharing projects with Adobe Illustrator.

This little app connects your iPad to your Mac, and enables you to use the iPad as a second display.

If you want to use your iPad as a drawing device for your Mac, like a Wacom, this is your app of choice.

Let's start meta: This is a little app to discover and manage all your Sketch plugins.

It gives you an overview of all the styles you've used so far and helps you merge the styles of similar layers into one.

Generate random content, whether that be names, addresses, profile pictures or background photos.

Create buttons with a fixed padding, no matter how long the text is.

Create spec overlays on top of your design (distance between elements, dimensions of icons, HEX code of colors etc).

A suite of plugins made by Invision. You can build prototypes, design with real API data, manage an asset library or get easy access to stock photos.

Always a great place to start with. Especially if the budget situation is unclear in the beginning. It never hurts to start with a free font, but it hurts to downgrade from the font you felt in love with to a free version.

You had a beautiful font in mind, but you need a similar free alternative? A guide by Typewolf matches popular and classic fonts with a free font alternative. The "site of day" section is also a nice place for inspiration.

My dealer of choice.

My text editor choice when I write code.

Ruby framework that I use for all my side projects that need some backend development.

If you are not coding front end stuff on a daily basis but just every few weeks or months ... Webflow is a great way to build fast production-ready HTML/CSS code. Of course also great for building functional prototypes.

Squarespace is nice if you don't write code or if you have to launch something super fast. Otherwise installing Wordpress on some third party web-host is currently my way to go.

Github is great, though private reps for free is a plus. Especially if you play some early client projects or pitches.

This place still gets not enough praise. It's not just a community, it's a real tool. Solves tons of problems.

The basic tool that might be much more powerful if Google finally would fix the UX.

Using Google Analytics is not enough to make the most out of your user data. Mixpanel has a feature set that makes it much easier to track specific user journeys and cohorts.

In the early phase of projects it is often unclear what you actually want to track. Then when you finally find out, in most cases you don't have set up the trackers yet. Heap has the advantage that it tracks everything from the start, without adding any code.

For any A/B testing experiments. Fast, easy to manage. Google launched a competitor now though.

For Mac as well as iOS. Tweetbot is by far the best way to consume Twitter (besides Nuzzle). Great UX design, many little big details, and one huge feature: No sponsored tweets in your stream. - Huge fan.

Still the one must have feature that Twitter has not build yet. A tool that helps you to keep track what's going on in your Twitter stream.

The best RSS Reader out there. Wait, what is RSS? Yep, I am an old guy. Subscribe to a website is one of the most underrated features, that the internet already had. Somehow we lost it. If you take the time to curate a bunch of RSS feeds that mean a lot to you, your RSS reader is still a treasure box of content.

Do you use social media for marketing purposes? Buffer is the best place for organizing your stream of content.

Get a weekly email with all my writings, notes and links on everything interesting I've seen in tech, marketing and design this week. See an example. And yes, I hate spam, too. Promise.
Twitter
Dribbble
Ello
Medium
Spotify
Teleport